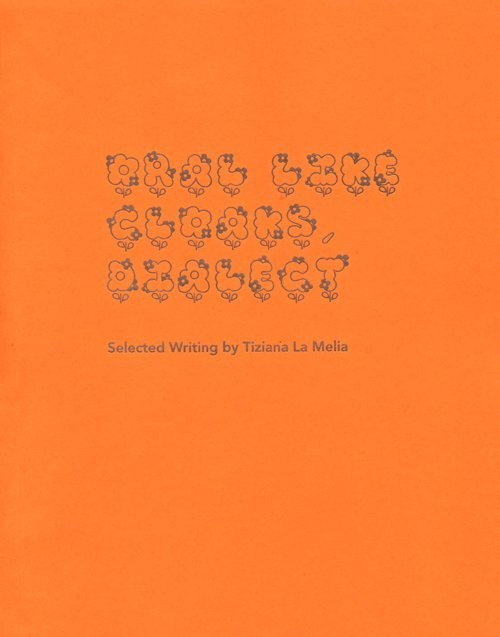 “And what exactly does a scarf have to do with an overcoat? you ask. Well, I suppose I was thinking at the time that a scarf would be a good thing to hide up one of my sleeves, covered in the scrawl of this script of coats.”

In this collection of poems, experimental prose and plays, artist Tiziana La Melia charts the subconscious movements of a wandering attention. An overcoat grumbles about the dubiousness of tailors, two flatworms converse about the length of an hour, and the misheard saint Joan d’arc becomes the ambivalent “Joan Dark” — all while the traces of emails and speculative writing prompts can be seen vibrating along the margins of pages, mixed in with spaghetti and stolen powder foundation. At once bookish and naive, these are whimsical, improvisational texts that tell stories in tangents rather than straight lines: writing constructed, and playfully undone.

This updated edition of Oral Like Cloaks, Dialect collects together selections from a decade of La Melia’s early writing (2005-2015) with the addition of several new texts and an afterword by the artist.

Tiziana La Melia was born in Palermo, Italy to itinerant workers and raised in a tomato patch among cherry trees in the Syilx/Okanagan Valley of interior British Columbia. She is the author of The Eyelash and the Monochrome (Talonbooks, 2018) and the chapbook Broom Emotion (2012). Recent solo and collaborative exhibitions include 17:4, Unit 17 (Vancouver, 2021), The pigeon looks for death in the space between the needle and the haystack, Unit 17 (Vancouver, 2018); Broom Emotion, Galerie Anne Barrault (Paris, 2017); Innocence at Home, CSA Space (Vancouver, 2015); and Johnny Suede, Damien & The Love Guru (Brussels, 2017). In 2014, she was a writer-in-residence at Gallery TPW (Toronto) and winner of the 2014 RBC Painting Competition. She lives on unceded Coast Salish Territories/Vancouver.